No Result
View All Result

In other news, Blue Cat’s freeware plug-ins pack II is still entirely and forever-ly free, with no registration, dongle or even mandatory newsletter required. And they have just been updated!

In light of Blue Cat’s preceding reputation, this would be enough said and we can end the article, because the name speaks entirely for itself. However, for the sake of thoroughness, and for those not yet familiar with Blue Cat, we will of course make sure to lay it all out and convince you to check them out.

Firstly, just so you know what you are using when trying their stuff, these are Blue Cat’s main audio standards:

This free plugin suite contains 6 effect plugins and a frequency-analyzer tool, bundled to provide a staple for most day-to-day mixing adventures. It can be potentially very useful for those starting out and trying to save a buck at first, but can prove purposeful for any producer or enthusiast. The plugins are exceptionally efficient in use, and the quality at which they do their thing shows many years of plugin know-how. Furthermore, they are still actively developed, because since December 15th, they have all been updated with several new features, and many improvements and fixes. The recommended (free!) update is fully compatible with the previous versions of the plugins.

So what is in them?

A vintage chorus effect with gain, delay, depth, rate, spread, dry/wet and shape controls. It can create simple chorus effects but also more drastic pitch modulation and even crazy bubbling effects, and the Spread knob on the stereo version can make your head spin in just a few clicks.

A vintage flanger effect with gain, delay, depth, rate, spread, dry/wet, shape, feedback and feedforward controls. Whether looking for a smooth and soft flange or a harsh and brutal effect, this plugin can do it, and the stereo version allows you to sweep from a mono to a stereo effect. 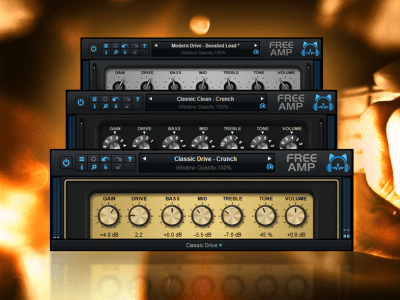 And Amp-simulator plugin with three models included, created with the acclaimed Blue Cat’s Destructor amp simulation modeler. Offering a wide range of guitar tones from clean vintage to modern high gain metal tones. Its operation is very easy, and you can also load Impulse Responses. Beware the drive knob though, at high settings it bites. 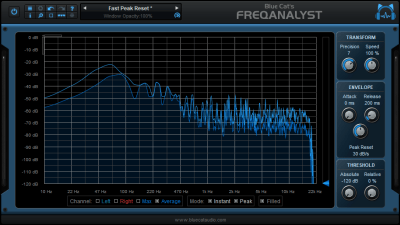 A spectrum analyzer plugin that offers smooth visuals in high resolution, and is able to display continuous variations even at high frequency resolution thanks to its unique interpolation algorithms. It includes management of most audio and frequency aspects, and a special thresholding system to focus and zoom on important parts and ranges. Additionally, you can customize the user interface with Blue Cat’s skinning language. 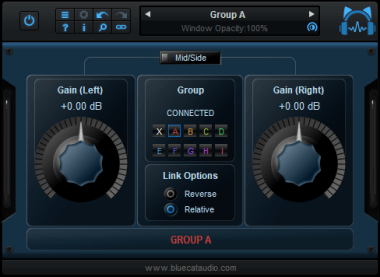 This is basically a Gain plugin suite included in the plugin bundle, containing a range of gain utilities to control the gain of one or several track simultaneously and in real-time. Included are advanced MIDI automation control, Mid/Side capabilities, ability to link several instances and control the gain of several tracks with one slider, and remote control functionality in combination with one of Blue Cat’s analysis tools.

A plugin modeled after vintage analog phaser circuits, with gain, stages, depth, rate, spread, dry/wet, feedback and shape controls. You can choose up to 32 phasing stages, control the phase of the signal in the wet and feedback paths, and more. For subtle phasing and for pushing to its limits, nothing phases this bad boy. 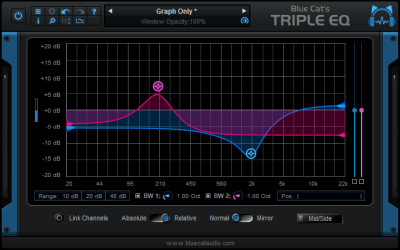 A 3-band semi-parametric equalizer which can be controlled like a single filter with customizable shape. A low and high-shelf filter, boost/cut peak filter, wide range and bandwidth of +/- 40db per band and from 0.01 to 5 octaves, this puppy is versatile. The filters are linked, controls are on top of the graph, it includes a dual channels version with linkable channels for panning solutions, …and even still, much more. Mistake not the fact that despite its three-band limitation, there aren’t many limitations to speak of, and this EQ is truly ‘up there’.

Normally, we would say “grab this plugin NOW”, but the truth is that you can grab it today or next year because it will remain free for as long as there is Blue Cat to give us these products. So try them now or next week, it doesn’t matter because we know you will and we know you’ll like them!

Voxessor from United Plugins is 75% off!

Some links on this website are affiliate links. The owner of the website may earn a commission on your purchase if you buy after clicking. Thank you for your support!

Flux Mini 2 is a FREE modulation plugin from Caelum Audio

Legally Hack the Native Instruments sale to get the BEST price on Kontakt!

Get 23 Legacy Plugins from ToneBoosters for FREE

ADVERTISEMENT
No Result
View All Result

This website uses cookies to improve your experience while you navigate through the website. Out of these cookies, the cookies that are categorized as necessary are stored on your browser as they are essential for the working of basic functionalities of the website. We also use third-party cookies that help us analyze and understand how you use this website. These cookies will be stored in your browser only with your consent. You also have the option to opt-out of these cookies. But opting out of some of these cookies may have an effect on your browsing experience.
Necessary Always Enabled
Necessary cookies are absolutely essential for the website to function properly. This category only includes cookies that ensures basic functionalities and security features of the website. These cookies do not store any personal information.
Non-necessary
Any cookies that may not be particularly necessary for the website to function and is used specifically to collect user personal data via analytics, ads, other embedded contents are termed as non-necessary cookies. It is mandatory to procure user consent prior to running these cookies on your website.
SAVE & ACCEPT