No Result
View All Result

TAL-Software has just updated three of its free audio effect plugins, and we felt it mandatory to let you know! Not because we’re obsessed with free plugins (well, perhaps a little bit), but because they truly sit on the higher shells of free plugins. Their Filter-2, Chorus-LX and Reverb-4 have all three received a free update, and to deliver the glad tidings we will go over them:

Filter-2 received a complete overhaul. Noticing off the GUI, we see they added a frequency cutoff knob to overcome a previous workaround. People have been requesting this feature for some time, so it is nice to see a developer responsive to its customers’ needs, even for their free products. We also see an added knob for stereo-offset, but that is far from all.

They lost the distortion functionality and old modulation types but replaced them with some shine. There are now 5 modulation types to play with, a ‘super clean’ SVF filter capable of self-oscillation, an updated spline editor to ‘draw’ them curves in any shape or form, different host sync options like note and trigger, a modulation trigger button that can be automated, and a legacy mode for backward compatibility when needed.

This plugin is very versatile with a thousand potential uses. It is somewhat similar to Shaperbox from Cableguys, another plugin we recently articled. While still a whole other animal, TAL-Filter-2 immediately gave us a similar feel and ‘aptness’, in that any desired effect or modulation can be set up in a flash. Additionally, it is very clean and crisp. The best way we can describe this cool little Filter plugin is extremely ‘clean’ and ‘to-the-point’.

PLUGIN DEALS NEWS:  Puncher 2 from WA Production is FREE with any purchase from ADSR

TAL-Reverb-4 got a smaller update, with an updated interface. They lost the rather bland blue colors and swapped them for some color. Simple, tight and sharp is how it now looks, in our honest opinion. They also added a new preset browser.

Other than this, TAL-Reverb-4 remains TAL-Reverb-4, described as a diffuse modulation Plate reverberation unit with a vintage after-taste. With controls for modulation rate, amount, room size and diffusion, it boasts a wide range of possibilities, and while a reverb unit can often require some additional processing power, TAL-Reverb-4 is noticeably light on resources. We quickly tested it against another, undisclosed free reverb plugin, and with 30 instances of each, TAL-Reverb-4 surprisingly only ate up much less than what its competitor took. 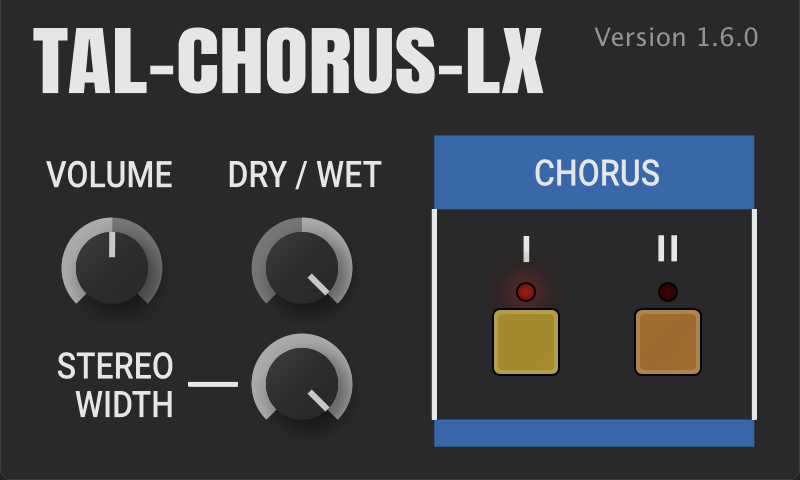 TAL-Chorus-LX received a new vector user interface and apparently had its core replaced, pimping it for its future endeavors in many a musician’s DAW.

Made as a standalone version of the TAL-U-NO-LX plugin, TAL-Chorus-LX mimics the Juno-60 Chorus effect with a minimal control-set. With only 2 chorus modes, stereo-width, dry/wet and a volume knob, its minimalistic interface makes quick work of chorus-effects that sound just awesome.

Mind that for all three plugins, you need x64 Windows 7 or higher, x64 MacOSX 10.9 or higher, ProTools 10.3.6 or higher or an x64 Linux distro. Other than that, fun is ensured and your money remains safe!

Get 96% off the Community Appreciation Bundle!

Some links on this website are affiliate links. The owner of the website may earn a commission on your purchase if you buy after clicking. Thank you for your support!

Flux Mini 2 is a FREE modulation plugin from Caelum Audio

Legally Hack the Native Instruments sale to get the BEST price on Kontakt!

Get 23 Legacy Plugins from ToneBoosters for FREE

ADVERTISEMENT
No Result
View All Result

This website uses cookies to improve your experience while you navigate through the website. Out of these cookies, the cookies that are categorized as necessary are stored on your browser as they are essential for the working of basic functionalities of the website. We also use third-party cookies that help us analyze and understand how you use this website. These cookies will be stored in your browser only with your consent. You also have the option to opt-out of these cookies. But opting out of some of these cookies may have an effect on your browsing experience.
Necessary Always Enabled
Necessary cookies are absolutely essential for the website to function properly. This category only includes cookies that ensures basic functionalities and security features of the website. These cookies do not store any personal information.
Non-necessary
Any cookies that may not be particularly necessary for the website to function and is used specifically to collect user personal data via analytics, ads, other embedded contents are termed as non-necessary cookies. It is mandatory to procure user consent prior to running these cookies on your website.
SAVE & ACCEPT